How Do We Stop Doing This to Ourselves? 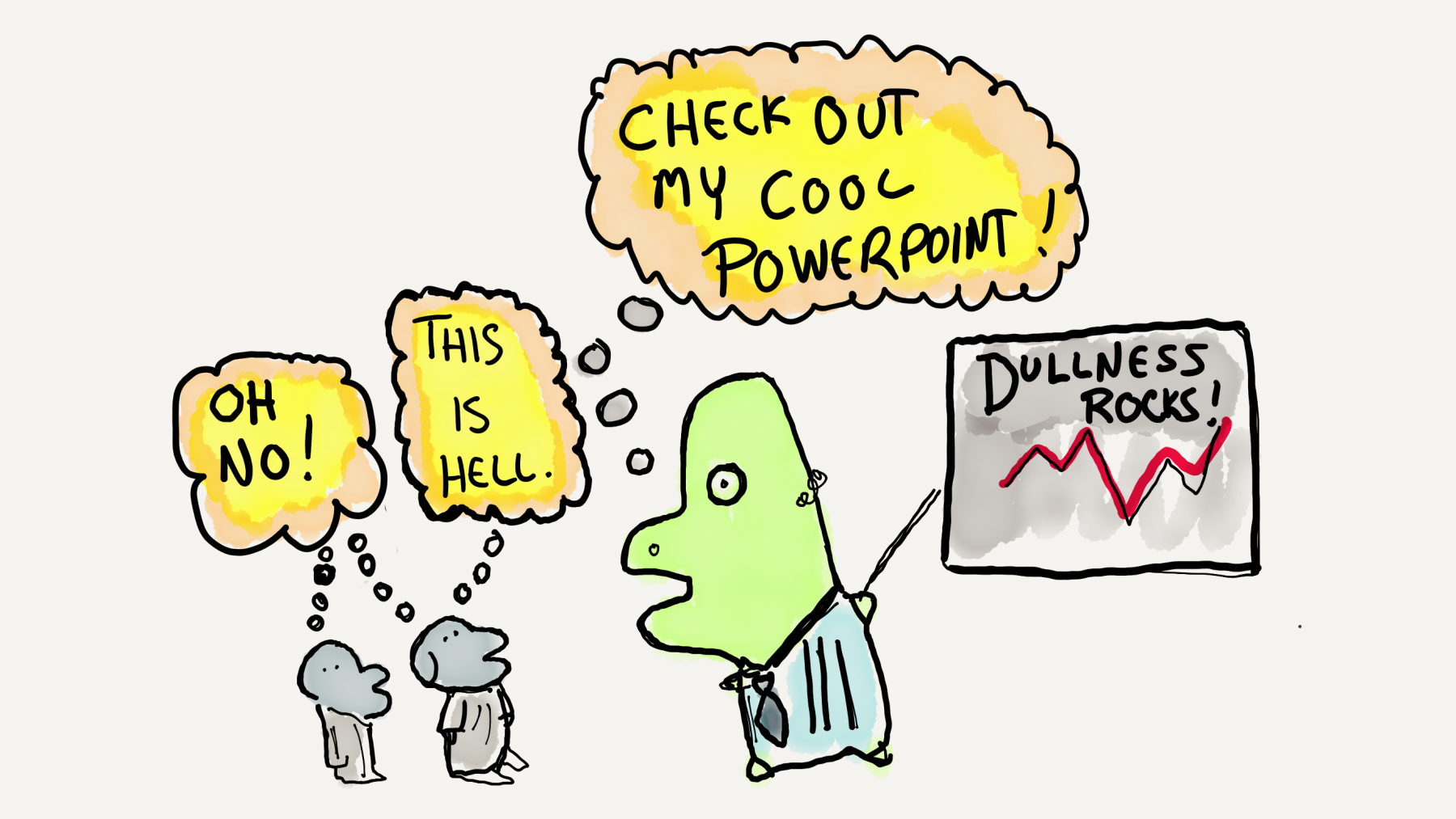 “We had a conference last month. 50 of us flew in.” A row of bankers turned to the Whistle-blower at the end of the line. “Two days of PowerPoint presentations. On the first day, after about 10 minutes, as another slide came up I thought, ‘I’ve got two more days of this, how do I cope!?’ Then I said to myself, ‘I’ll put a smile on my face, stare in the direction of the presenter, and think happy thoughts.’ So that’s what I did. I didn't listen to a single word… for two whole days.”

For a few seconds there was silence, then another man nodded. “Yep, I did the same.” There was more sighs of agreement, the dam had burst, clearly this had not been a successful conference.

Then a middle aged man at the centre of the line, who had been staring at the floor, looked up. “I organised that conference; he’s right. It was two days of death by PowerPoint. And we do it every year. How do we stop doing this to ourselves?”

How much money and resources was involved in putting together this conference? Never mind that no one listened or was physically or even metaphorically there.

The cost of bringing 50 bankers (flights, pay and accommodation), of their preparation time (for presentations that no one would listen to), and then the negative energy created and then not dissipated, must have been humungous.

So how do we stop doing this to ourselves?

Here’s the 6 solutions we came up with in the ensuing 30 minutes of that workshop. It happened some years ago but this is how I remember it.

1.    Be clear on the purpose of the presentation, the impact you want to have on your audience and answering the “So what?” question. Watch how Steve Jobs builds massive anticipation that answers the audience’s “so what?” https://youtu.be/x7qPAY9JqE4Then deliver with passion, stories and intent

2.    When putting together your presentation add the slides at the end of the creative process and where you believe they will help your audience. See Carin Bondar’s very funny https://www.ted.com/playlists/19/did_you_know But avoid this film if you don’t like seeing large or detachable penises!

3.    Most people don’t know this simple trick but it’s very powerful. Use the ‘B’ or ‘W’ button on your keyboard or clicker. This turns off PowerPoint (or more accurately turns the screen to Black or White).

4.    Lose as many words as you can. See if you can reach the magic 5 words or less per slide (it takes 500% more effort to read 7 words). Remember you’ll be giving clarity by talking round the images, and a good image says a 1,000 words.

5.    The most successful TED talks average 3 laughs per minute. On many of them, 60%+ of these laughs come from funny slides. Make some of your slides humorous. Watch the first two minutes of Tim Urban’s very funny talk.  https://youtu.be/arj7oStGLkU

6.    Do you really, really need to use a slide? Use props, use flip-chart, make it interactive, make it emotional.  See Eddie Obeng’s use of IPad in (7 minutes into film) https://www.ted.com/talks/eddie_obeng_smart_failure_for_a_fast_changing_world

Finally, use this neat trick from the world’s greatest theatre director, Peter Brook. When directing Shakespeare, he would say to himself, would an audience of 10 year olds be bored by this? (In 2000 when directing Hamlet he invited a group of 10 year olds to watch rehearsals, and then watched their reactions). If the answer was yes, then he changed the production until his imaginary audience of 10 year olds was engaged, entertained and inspired. Try doing the same thing with your presentations. Then you won’t ever have to wonder, “How do we stop doing this to ourselves?”